The members and Committee of the club like to raise funds when we can for worthy causes.

Annualy we hold 2 Darts Knockouts and donate all proceeds to the Cardiac Unit at The Royal Berkshire Hospital and more recently we have held entertainment evenings with proceeds from all ticket sales going to the chosen charity. 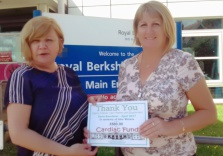 £880 was raised on this day the cheque was presented by Beenham Club Chairperson Jane Foley to the Royal Berkshire Cardiac Clinic. 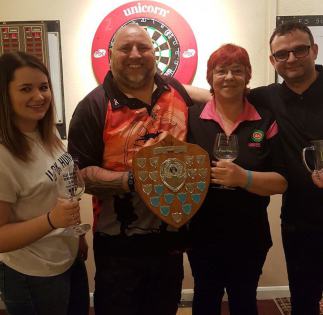 £625 was raised for the Royal Berks Cardiac Ward.

Thank you to all that attended, bought raffle tickets and donated raffle prizes.

Congratulations to the Winners

Mo Morris and Tress Lee with

The  Annual Ralph Waters Memorial Darts knockout took place Sunday 27th August.  As there were not as many entries as previous years it was agreed to play a "round robin" for the men, this ensured that all entrants had more than one game.  The Ladies played the traditional best of 5 knockout.

The Mens runner-up was Bob Bowers. Mo Morris was crowned the winner (after trying for many years to get hs name on the shield)

Carol Bowers was the ladies winner and Janet Larkcom runner-up

A big thank you to all that attended,entered and bought raffle tickets a total of £400 was raised on the day which is going to Royal Berkshire Hospital Cardiac Clinic. 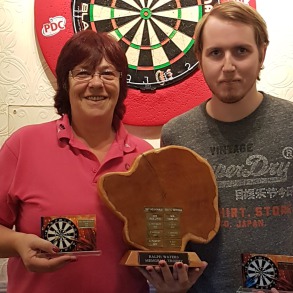 £561 was raised for the Royal Berks Cardiac Ward.

Thank you to all that attended, bought raffle tickets and donated raffle prizes.

Congratulations to the Winners

Thomas Grigg and Tress Lee with

We are very pleased to announce that we have, so far, raised a total of £740 for the Royal Berkshire Hospital Breast Screening Clinic Appeal to assist with the purchase of a new Ultrasound Scanner.

Thank you to everybody that supported our events and this very worthy cause. 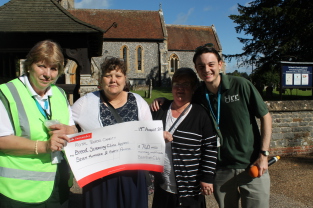 RBH Charity held their Soapbox Challenge at Englefield Park on Saturday 19th August 2017.  We took the opportunity to attend and present them with a cheque for £740 from the members and friends of Beenham Club.  June Leatham accepted the cheque on behalf of the charity.  Kim spoke over the PA system and did a fantastic job of telling everybody that, although we are a small club, we all pull together to raise money for charity and have fun whilst we are doing it.   Thanks again to everybody that helped us raise the money for this great cause.